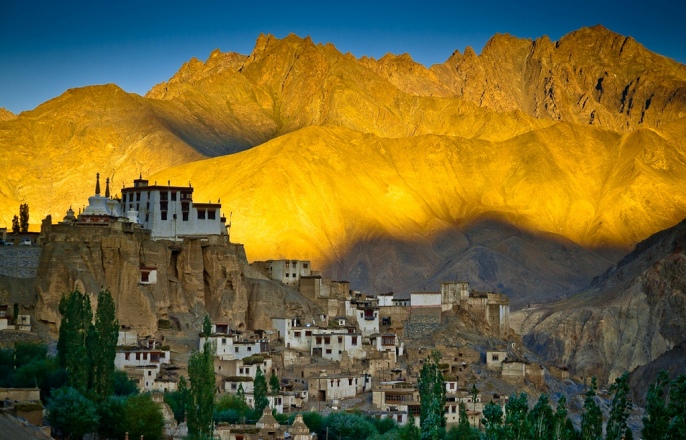 Ladakh "India's Own Moonland" ("land of high passes") is a region in Indian state of Jammu and Kashmir that currently extends from the Kunlun mountain range to the main Great Himalayas to the south, inhabited by people of Indo-Aryan and Tibetan descent. It is one of the most sparsely populated regions in Jammu and Kashmir and its culture and history are closely related to that of Tibet.
Ladakh has much to teach the West regarding ecological awareness. Most Ladakhis are cash poor yet their traditional mudbrick homesteads are large and virtually self-sufficient in fuel and dairy products, organic vegetables, and barley used to make tsampa (roast barley flour) and chhang (barley beer).

Historically, the region included the Baltistan (Baltiyul) valleys (now mostly in Pakistan) the entire upper Indus Valley the remote Zanskar Lahaul and Spiti to the south much of Ngari including the Rudok region and Guge in the east, Aksai Chin in the northeast (extending to the Kun Lun Mountains), and the Nubra Valley to the north over Khardong La in the Ladakh Range. Contemporary Ladakh borders Tibet to the east, the Lahaul and Spiti regions to the south the Vale of Kashmir, Jammu and Baltiyul regions to the west and the southwest corner of Xinjiang across the Karakoram Pass in the far north. Ladakh is renowned for its remote mountain beauty and culture. Aksai Chin is one of the disputed border areas between China and India. It is administered by China as part of Hotan County but is also claimed by India as a part of the Ladakh region of the state of Jammu and Kashmir. In 1962, China and India fought a brief war over Aksai Chin and Arunachal Pradesh, but in 1993 and 1996 the two countries signed agreements to respect the Line of Actual Control.

Nubra is a tri-armed valley located to the north east of Ladakh valley. Diskit the capital of Nubra is about 150 km north from Leh town, the capital of Ladakh district, India. Local scholars say that its original name was Ldumra (the valley of flowers). The Shyok River meets the Nubra or Siachan River to form a large valley that separates the Ladakh and Karakoram Ranges. The Shyok river is a tributary of the Indus river. The average altitude of the valley is about 10,000 ft. i.e. 3048 metres above the sea level. The common way to access this valley is to travel over the Khardung La pass which is highest moterable road in the world. Foreign nationals are required to get a Protected area permit to visit the Nubra Valley. Since 1 April 2017 Indian citizens are also required to get an Inner Line Permit to visit the valley.

Khardung La is at times incorrectly cited as the highest vehicle-accessible pass in the world. A well-graded Indian military road (visible on 2011 imagery on visual globe systems such as Google Earth) reaches 5,610 metres (18,406 ft) 250 meters west of the 5,545 metres (18,192 ft) Mana Pass on the India-Tibet border. It connects with an equally well-constructed, slightly lower Chinese military road based on SRTM data at posting intervals of 30 meters..

Pangong Tso Tibetan for "high grassland lake" also referred to as Pangong Lake is an endorheic lake in the Himalayas situated at a height of about 4,350 m (14,270 ft). It is 134 km (83 mi) long and extends from India to China. Approximately 60% of the length of the lake lies in China. The lake is 5 km (3.1 mi) wide at its broadest point. All together it covers 604 km. During winter the lake freezes completely, despite being saline water.Pangong Tso can be reached in a five-hour drive from Leh, most of it on a rough and dramatic mountain road. The road crosses the villages of Shey and Gya and traverses the Chang La, where army sentries and a small teahouse greet visitors. The road down from Chang La leads through Tangste and other smaller villages, crossing river called Pagal Naala or "The Crazy Stream". The spectacular lakeside is open during the tourist season, from May to September.


An Inner Line Permit is required to visit the lake as it lies on the Sino-Indian Line of Actual Control. While Indian nationals can obtain individual permits, others must have group permits (with a minimum of three persons) accompanied by an accredited guide; the tourist office in Leh issues the permits for a small fee. For security reasons, India does not permit boating..

Monasteries in Ladakh are much more than religious centers these famous monasteries are purifying havens where one can find inner peace. Include them in the itinerary as you plan a trip to Leh Ladakh to enjoy the splendid and spectacular topographical medley comprising snow-capped mountains, sprawling cold deserts, sparkling lakes, surreal glaciers, and serene mountain passes.

About 20 km east of Sonamarg is Zoji-la pass, the gateway to the Ladakh plateau. Situated at a height of about 3,528 m above sea level, the pass connects Kashmir Valley to Ladakh, Kashmir Valley to its south and Ladakh to its North. It is an ideal spot to enjoy the scenic beauty..

Over the years trekking in Ladakh has been one of the demanding mountain activities, pulling in global explorers to discover the unspoiled territory. The trekking tracks winds up to summits wherefrom one can enjoy a bird's eye view of the Karakoram Range, which is aligned with several towering peaks like K2, Saser I, Saser II, Saser III, Saser IV , Saser V and more, Zanskar Range and Nubra Valley. The Stok Kangri summit trek is one of the challenging treks in the Ladakh region that offers such a celestial view.

Apart from exploration, Ladakh camel safari tour also provides brilliant chances to come close to nature. Spending night under the stars surrounded by tranquility while leaving the world behind is a remarkable experience in itself.Along with camel safaris, tourists can also enjoy several other activities in Ladakh like trekking, mountain biking, mountaineering, white water rafting and yak safaris. There is a wide range of trekking routes in Ladakh that are meant not only for professional trekkers but also for beginners. Among them, Nubra Valley Trek, Markha Valley Trek, Frozen River Trek, Spituk Trek and Zanskar Trek are the most famous ones.

Mountain biking in the Ladakh region from Manali to Leh pedals through several high altitude mountain passes, namely Rohtang Pass at an altitude of 3,980 meters followed by Baralacha Pass at 4892 meters, Lachung la Pass at 5,065 meters and finally Tanglang Pass at 5,360 meters. It also wheels through remote villages tucked in the heights. The 15 days of biking expedition in the Ladakh region allows you to camp overnight at villages like Keylong, Brandy Nalla, Jispa, Sarchu, Pang, Rumtse and Upshi. Making To make the expedition more interesting and adventurous, one can even step to the fore and hit for some beautiful short treks in the Ladakh region. The Sham Valley Trek, Spituk Trek, Lamayuru Alchi Trek and Nubra Valley Trek are some of the best trekking expeditions that one can add to their mountain biking tour in the Ladakh region.

Further, mountain biking in the Ladakh region is also possible from Leh to Khardung La, at 5,359 meters, which is said to be one of the highest motorable roads in the world. The journey brings one face-to-face with the remote culture in the Ladakh Valley, ancient monasteries and panoramic vistas. From Khardung La one can get a clear view of the Nubra Valley and surrounding snow capped ranges situated at binocular distance. The journey then proceeds on boulder tracks to Nubra Valley, which is the land of Bactrian Camels, Pashmina Goats and several remote villages along the River Nubra. The biking trek from leh to Srinagar via Lamyuru and zojila Pass is one of the most adventours trek for biking and very famous amoung froigen travellers.

The Indus River, locally known as the Singhe Khababs (out of Lion’s mouth), flows across the north west to the south east, passing through Ladakh and flows into Pakistan where it joined Shayok and Suru to become major historical Indus River.

The Indus, originates near the Kailash Mountain and the Mansarovar Lake in Western Tibet. Water levels remain high during the month June to late August, which is the best season for fascinating rafting expeditions. The travel agent offers white water The rafting on Indus provides spectacular view of the landscapes Ladakh and Zanskar ranges which housed Buddhist monasteries on high cliff.River rafting on Indus for one to five days.
Rafting on Indus
The white water Indus has rapids generally of I and II grades and at some places, has grade III to even V rapids. The popular rafting points are from Phey to Nimo and also from Upshi to Kharu or from Upshi to Nimo. The other points run from Phey to Saspol or Phey to the Indus - Zanskar confluence at Nimo and from Nimo to the historical monastic enclave of Alchi, about 75 Kms west of Leh. Experienced rafters may also want to try the more challenging route between Alchi and Khaltsey, which takes in the kilometre long series of rapids at Nurla. Easier runs include the run between Hemis (40km south of Leh) situated along a road crossing the Indus and Choglamsar, which is a three-hour trip that goes through quiet, calm waters, and passes through the riverside villages of Stakna, Shey and Thiksey (25km south-east of Leh), before ending at Choglamsar, just short of Leh city.

Leh is an ideal place for you Indulge in shopping spree at the unconventional market where hordes of stalls offer handicrafts, antiques, and precious and semi-precious gems. The hand-spun rugs, shawls and carpets are among the highlights of this market local shop running by Kashmiri and Ladakhi peoples. Leh Market is Located amidst beautiful surroundings that are characterized by distant snow-capped Himalayas and verdant forests, this marketplace is simply a must-visit!

(November to March) are chilly with temperature goes down to subzero levels. Snow bound landscapes are the typical views in winters and snowfall is common.

(April to October) are bit warm and pleasant with cool atmosphere and climate. Average temperature is around 20°C. Summers is ideal for sightseeing, adventures and pilgrimage. Snow can be found on high altitudes.

(July to September) is not very vigorous but the hilly rugged terrains can become slippery. It is challenging to take up trekking through the curved and caved paths.

Q: Is there any Direct Buses from Delhi?
A: No ( There no bus service from Delhi)

Q: Is this area is restricted ?
A: Yes but in some points where you have to get permision from local tourism office.

Q: Were i can get permision/ Permit passes?
A: Online Holidays Srinagar Tourism  or  Local Tourism office Leh .

Q: Is there any permission/ Permit to visit this place?
A: Yes ( Online Holidays Srinagar Tourism can arrange the same )

Q: Whats is the Taxi / Bus Charges from Srinagar?